Ready to Go to Work

So, it’s 1 June and the lockdown is being eased a fraction more.  From today, up to six people can meet in your garden, and after more than ten weeks since I last performed a show, I am so ready to give you a party to remember. And if my daughter is anything to go by, the kids are also so ready for some live entertainment that doesn’t come from a TV or computer screen!

But it will need to be a small party. The government has, quite correctly, set the rules so that we all protect each other.  So, for a family of three – mum, dad and child – you could invite Magic Peter to perform a fantastic magic show and your son or daughter could invite his or her best friend and a parent to join in the fun.

The child’s parent is important for a number of reasons, but here are two.  First, the invited child must remain at least two metres from your family and from the performer, so you need the child’s parent to take that responsibility.  You are not going to be able to take the guest gently by the elbow and move them back to where they should be, as that in itself breaks the 2-metre social-distancing rule.

Second, if the child needs the toilet, it’s within the rules for the them to enter your house for that reason, but you cannot escort them; again, that’s the child’s parent’s role.

So you’re limited to the number of people you can invite – a family of three can invite one child and his/her parent; sadly a family of four isn’t able to invite anyone if you want a performer at the party too.

I have needed to adjust my act too, so that I remain 2 metres from the audience. At the moment, I’m not allowed to invite the children up to perform a magic trick with me as I used to.  But just because they can’t come ‘on-stage’ doesn’t mean they can’t help do the magic.

Of course they can!

And they’ll get a free, sanitised magic wand to perform the magic with. 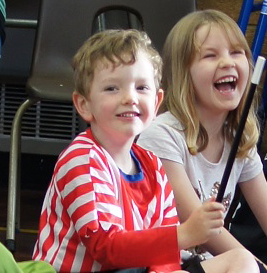 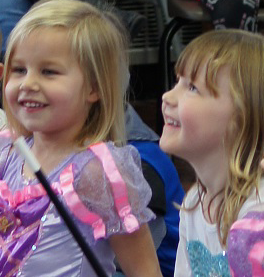 It’s amazing that my magic wands still work over a distance of 2 metres!!

As we move into summer – and long may this great weather continue – you now have the option of having a Magic Peter birthday party in your garden. And hopefully before the summer is out, the ‘R’ will have dropped low enough that the government may be able to ease the restrictions further and we’ll be able to invite a larger number of people into our gardens – maybe even into our homes or village halls.  If so, I’ll post more details then.

So please get in touch. 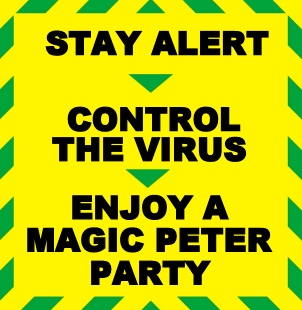